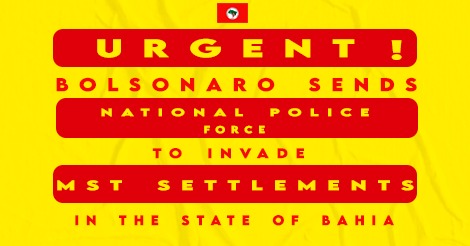 The Landless Movement comes to the public to repudiate the Bolsonaro Federal Government’s attack against Agrarian Reform in the state of Bahia.
Last Wednesday (2) morning, Minister of Justice and Public Security (MJSP), André Mendonça, published in the Official Gazette decree No. 493, of September 1, 2020, which authorizes the Brazilian National Force to attack the MST’s areas in the municipalities of Prado and Mucuri, in the extreme south of Bahia.

Through this decree, the Ministry of Agriculture will have the Brazilian National Force support, until October 2, for repossession and eviction actions against MST settlements in the region.

The extreme south of Bahia is located in a territory with rich and fertile lands that are the target of financial speculation, international capital and local oligarchies.

It is a region in which the MST concentrates its greatest organized force. In the last period, the Movement’s conquests were intensified in this region, above all, after a great confrontation with the eucalyptus companies in the 2000s. This resulted in the conquest of more than 35 thousand hectares of land for Agrarian Reform, of this total, not even half
was actually transferred to the MST.

After the last presidential election, which elected a figure who publicly criminalized people’s social movements, Landless families have been suffering persistent and growing attacks and withdrawal of rights earned over time and the Agrarian Reform process has been completely paralyzed.
In view of this scenario, the Bolsonaro government elected this region in order to reduce the political strength of the MST, first: not making the expropriation processes feasible,
second: trying to fragment the territory and third: trying to criminalize the MST in all
possible ways.

In the region, the 28 settlements adopted agroecology to produce quality and healthy food, within the agroforestry system. As a result, the Egídio Brunetto Popular School is being built to help in this educational process. The School has been under constant threat in this process of persecution.

In view of the threats and arbitrary attacks, the MST reaffirms its commitment to remain organized and in struggle so that the settlement and camp areas remain increasingly
strengthened.

We reiterate that the presence of the National Force was not authorized by the government of Bahia and that its presence is an affront to the working class.

At a time like the one we are facing, it is outrageous for the government to use force to invade our productive spaces, when, in fact, it should be concerned with the health of the people.

This onslaught is nothing more than an unfounded desire to end the struggle for land in the
country.