On the 17th of April, the MST carried out symbolic actions of memory and denunciation for the martyrs of Eldorado do Carajás in more than 50 areas of the country, involving 21 Brazilian states, in addition to symbolic actions in the streets of France and in a training course in Haiti. International activities were attended by members and friends of the MST.

Among the activities in Brazil, blockades and symbolic actions were carried out along roads and highways, public squares, donations of food and lunchboxes, donations of seedlings and planting of trees.

The actions took place in the five regions of the country. And in addition to denouncing the impunity of the Eldorado do Carajás Massacre and the massacres that have been taking place over the years against rural workers, the Landless defended People’s Agrarian Reform, demanded a vaccine for everyone and denounced the genocidal policies of the federal government, with demands for “Bolsonaro Must Go” and emergency aid of R $ 600.00.

The protests of the Landless workers also point to people’s agrarian reform as a viable alternative to combat the increase of hunger in the country, including a demand that the federal government must resume public policies to support peasant and family agriculture.

Since the beginning of the pandemic, the MST has donated more than 4 thousand tons of food without pesticides and about 700 thousand meals to families in situations of social vulnerability.

In addition to street actions, the MST carried out online activities. In the first period of the morning, in parallel with the mobilizations that were taking place in the states, online activists mobilized on social networks put April 17 among the 10 most commented subjects on Twitter, with the hashtag #Carajás25Anos.

There was also the International Political-Cultural Act in Memory on the 25th anniversary of the Eldorado do Carajás Massacre, which brought together participants from various parts of the world and had simultaneous translation into English, Spanish and French.

During the day there was also the closing of the 15th Pedagogical Camp of the Landless Youth Oziel Alves and the screening of the film “Chão” via the Amazonian International Film Festival of the Frontier. After the exhibition, a debate was held with director Camila Freitas and MST leader in the state of Pará, Maria Raimunda.

Messages to the MST

April 17 was also marked by messages of support and solidarity with the MST. Artists and friends of the Movement sent videos highlighting the emblematic date of mourning and struggle of the 25 years since the Carajás Massacre.

Also in a message of support for the MST, Chico Buarque reads an excerpt from the book “The massacre: Eldorado do Carajás – a story of impunity”, by Eric Nepomuceno, in which he includes details of the Massacre and extends solidarity to the movement:

“I wanted to express my respect for the MST. My solidarity, my admiration for your struggle, knowing that the movement has grown. The MST has developed, established itself, but it is always in danger. A big embrace for all of you, with all respect to the founding.”

Follow the actions that took place in major regions throughout Brazil:

In Pará, BR 230 Transamazônica was blocked by families from PA 1 ° de Março settlement and other groups of peasants in the municipality of São João do Araguaia. BR 155, towards Marabá – Eldorado dos Carajás was also blocked by families from the Helenira Resende and Hugo Chávez encampment. Still on BR 155, towards Eldorado dos Carajás – Xinguara, the road was occupied by peasants from the Dalcídio Jurandir encampment, where they did a symbolic act, putting up banners and burning tires. The same happened on BR 275, towards Curionópolis, in Parauapebas, by the families of the Frei Henri encampment.

Still in the interior of the state, the Terra Cabana encampment set up 21 black flags and 21 crosses to remember the martyrs of the Eldorado do Carajás Massacre. The Frei Henri encampment in Curionópolis also paid tribute.

In the capital of Pará, members of the MST and the Pastoral Land Commission (CPT) performed a symbolic action for the International Day of Agrarian Reform in the April Martyrs’ Square. In this place the monument of the Column of Infamy of the Danish artist Jens Galschiøt is erected in honor of those who fell in the massacre of Eldorado dos Carajás.

In Tocantins, the Padre Josimo and Carlos Marighela encampments met in Araguatins, where families planted trees, donated basic food baskets, and performed a symbolic action on the TO 404 highway, blocking the lane for 21 minutes in memory of those killed in Eldorado do Carajás.

Another three demonstrations took place in the state, with blockades on the BR 230 Transamazônica highway, on the Belém-Brasília de Tabocão highway, and on the same highway, from Belém-Brasília at the municipality of Crixás. Throughout the state, activities with banners and crosses were recorded with mobilizations in settlements and encampments.

In the Northeast region of the country, there were roadblocks on the CE 390 road, in Ceará, and on the BR 093 highway in Sergipe. BR 101 was occupied in Bahia in the Baixo Sul region; in Recôncavo Baiano, actions were carried out on BR 093; and in the Northeast of the state, BR 110, in the city of Paulo Afonso and BR 235 in Canudos were also closed.

In all regions, in addition to the blockades, there were also symbolic actions of protest with donations of food, seedlings and planting of trees in honor of the martyrs in various regions in Alagoas, Pernambuco, Paraíba, Ceará, Piauí, Rio Grande do Norte and Bahia.

In the Federal District, BR-020, at km 12 in Planaltina, was occupied in honor of the martyrs and there were food donations. In Goiás, food donations were also made to vulnerable families. In Mato Grosso, there was a blockade of BR 163/364, km 12, towards Jangada; as well as banners in Cuiabá, demanding “Bolsonaro Must Go!” and “People’s Agrarian Reform for the country not to go hungry”. In Rondônia, symbolic and solidarity actions took place in Jaru.

Tributes took place with banners and symbolic actions for the martyrs from the Armazém do Campo in Rio de Janeiro, which once again distributed lunch boxes to the vulnerable population.

In São Paulo, during the Day of Struggle program, 21 trees were planted in memory of the martyrs of the Eldorado dos Carajás massacre at the Plínio de Arruda encampment in Promissão. Where they also protested today with banners demanding “Bolsonaro Must Go” and R $ 600.00 Emergency Aid.

In Minas Gerais, blockades occurred for the Carajás martyrs on Highway 040, km 45 and Highway 381, in Fernão Dias.

In Rio Grande do Sul, BR 158 in Cruz Alta was occupied. And in Paraná, 67 tons of Agrarian Reform food were donated, distributed in 14 cities, in addition to 2,100 liters of milk, 1,100 lunch boxes and a blockade on BR 170. In Santa Catarina, Irineópolis, the Landless families planted 21 trees in the Mimo settlement in memory of those killed in the Eldorado dos Carajás Massacre.

Check out the video: 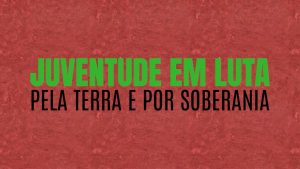 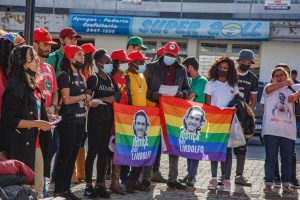 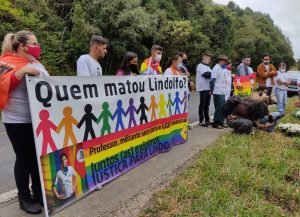