With the motto: “Cultivating Solidarity to Feed the People”, the MST’s Christmas Without Hunger campaign has already started to raise funds for food donations and for holding popular suppers that will feed vulnerable families in all major regions of the country.

The baskets are being prepared with food produced in settlements and encampments of the Popular Agrarian Reform, with a view to guaranteeing a sufficient quantity to feed a family of four for a month and have an average cost of Reales $300 each. But any amount raised will contribute to donations.

Solidarity is a practice that has been rooted in the social base of the Sem Terra Movement since its foundation, but with Brazil’s return to the hunger map, affecting 5 out of 10 homes, solidarity actions have never been more necessary. With that, just during the Covid-19 pandemic, since last year, the MST has already donated more than 5,000 tons of food and 1 million lunches in urban and rural peripheries in Brazil.

“The campaign’s priority is to assist people living on the streets, community kitchens on the outskirts, urban occupations by unemployed families and indigenous communities” – says João Pedro Stedile, from the national coordination of the MST. Showing in practice once again that real food is food produced by peasant family farming and not by agribusiness that beats profit records at the expense of a starving nation.

The campaign in its special edition of Christmas solidarity action takes place from December 10th to January 6th. According to theologian Leonardo Boff, who is part of the network of supporters of the initiative, the action: “It is not just about giving food, but offering food produced by the peasants. So we help both those who are planting and those who are consuming. That is solidarity: that this Christmas; it is the birth in us of this virtue, a virtue that is the most human of all”.

National pact against hunger – “Eating is a political act!”

The beginning of the basket deliveries will be marked by large mobilizations of food donations and denunciations against hunger that will echo in the streets, together with the mobilizations for “Fora Bolsonaro” and its policies of death against the people, which will take to the streets on the next tenth of december.

The mobilization of the campaign is part of the agenda of a national front against hunger, formed by the MST together with various movements, organizations and entities that practice fighting hunger and food insecurity.

During a meeting of the front management committee at the “I National Plenary Against Hunger”, held at an online event, this Friday afternoon (26 of December), agents who are on the front lines against hunger in the communities report that we are living such a moment. critical in the context of food insecurity, which families report that they do not have food with them, not even in the dumps.

The aggravations of this crisis are linked from the issue of lack of subsidies to the peasantry, public management and how it all affects both the countryside and the growing hunger in cities as well, they scored in a collective analysis scheduling an extensive calendar of actions for this and the next year.

“Facing the dismantling of public social assistance policies, dismantling the public food stock, as is the case with CONAB [National Supply Company] and all these other related issues”, recalled Kelli Mafort of the National Directorate of the MST, during the plenary.

In addition to the food donation itself, the management committee of this front has sought to dialogue with its social base about how the dismantling of subsistence and food sovereignty policies, which have been promoted by the Bolsonaro government, add to the urgency of facing the challenges of overcoming them as a popular and organized force with the different sectors of society.

To contribute to the campaign, just send a contribution to: 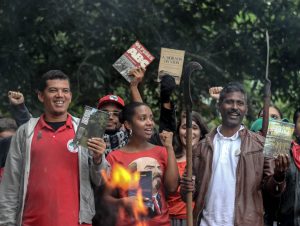 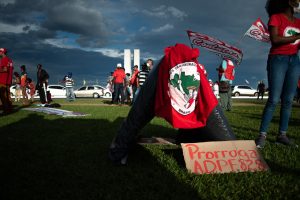