By the Samora Machel Internationalist Brigade
From the MST web site

At the end of the first phase of the Fred M’membe Literacy and Agroecology Campaign, one of the certainties we have is the involvement and commitment of the Zambians involved in the process. From the national and provincial coordination, from the teachers, but especially from the students.

The joy evident on each face, the dances moving the bodies to traditional music sung by the classes, since the beginning of the monitoring and the graduation in Lusaka, the first province to finish this first phase of the campaign, demonstrated how much an organized people moves transformations.

The campaign started mobilizations in 2019, but the groups only materialized with the beginning of the training throughout 2021. It was carried out in three Provinces: Eastern, Lusaka and Western, in 22 municipalities, mostly in the rural communities. In all, the campaign directly involved 2130 people, but indirectly involved more than 5400 people, including candidates for mayor of the Socialist Party, councilors, local leaders and the community in general.

Coordinated by the Samora Machel Internationalist Brigade of the MST and the Socialist Party (SP) and based on the method of speaking, reading and writing the words and the world, created exclusively for this action, but based on the Cuban method Yes, I can!, the Campaign moves on to its second phase in 2022, where it will move to three other provinces in the country, Muchinga, Northern and Copperbelt.

What is the “to talk, to read, to write the words in the world” method? Does it dialogue with the reality of the Zambian people and fulfill the objective of teaching them to read and write? In what way?

Elizabet: The “to talk, to read, to write the words in the world” method is the result of popular education that Paulo Freire defended so much, as well as being inspired by literacy methods developed in Brazil and Latin America.

Importantly, the Zambian people are literate and multilingual in 72 local languages. We know people who have never been to school, but who master two or three local languages, both orally and in writing. Therefore, when we talk about illiteracy, we are referring to the English language, which is incorporated in all areas of political, social and cultural life in the country.

Therefore, the method was designed according to this reality, considering the culture and life experience of the Zambians, stimulating a critical sense around the identification of violence and oppression, especially about civil rights.

Sarah: It is the method where we teach the student to speak, read and write in the official language (English) of our country. Most of the time, people get stuck in life because they don’t know how to read and write. Education does not end; it is a journey for life. And the method is fundamental to contribute to the solution of problems from the stimulus of critical thinking.

How is the method constructed by the campaign different from the traditional way of teaching in Zambia?

Elizabet: The method proposes to be more than a decoder of letters and numbers so that the student can read the words and the world, thus making it possible to expand their cosmovision and recognize themselves and their community as subjects of rights. This is how when we talk about food sovereignty, for example, each of the students, who are mostly peasants, is able to understand the damages of an agriculture based on pesticides and how their community must be a guardian of the seeds, of the natural goods from the maintenance of ancient agricultural practices.

Sarah: The traditional way of teaching here in Zambia is very time consuming compared to this method where in a short period of time (3 months) a person is able to speak, read and write. Not to mention that access to education is not entirely public. Currently, people who enter the school complete the primary years of basic education at the expense of the state,up to the sixth or seventh grade, and then are forced to pay various fees and costs, which in practice make it impossible for a large part of the population to continue studying.

Why carry out a literacy campaign in the country? How many municipalities and districts were involved?

Elizabet: In Zambia, there is a high rate of people who neither read nor write English, the rate reaches 55.3%, that is, more than half of the population. And in that percentage the majority are women, especially rural women. Therefore, the demand to ensure that these people can access their basic rights, such as education, is latent. In the Western Province, for example, we managed to involve 8 municipalities and 15 communities, operating mostly in rural areas.

Sarah: Because it will help to eradicate illiteracy here in Zambia. There are many people who are illiterate in English. This is what happens here in the Eastern Province, where the illiteracy rate in English is one of the highest in the country, around 30% and 38%, something that directly affects the development of our country. With the Literacy and Agroecology Campaign we managed to involve the 11 municipalities that make up the province and 10 districts.

In general, are women the majority of students in the classes, because they are the ones who most need the literacy method?

Elizabet: In the statistics of illiterate people in Zambia, the majority are women and they are even the most excluded from basic rights such as access, health and education. However, it is women that we see the most in informal jobs, such as selling charcoal, fruit, clothes and cleaning.

Sarah: Women are looked down on and face many challenges, both in the family and in the community. However, they have a high participation in family farming, as they depend heavily on it for survival. Including the supply of local raw material for the production of organic fertilizers, as was the case in the places where there were agroecology workshops, but also participating in the manufacture of these fertilizers to have their own products.

What are the impacts of the Campaign for the communities?

Sarah: If people can read, speak and write, life becomes easier for them too. Because education is the key to development, to open many doors in the future. In addition, it reduces high levels of poverty as it enables the country to develop. 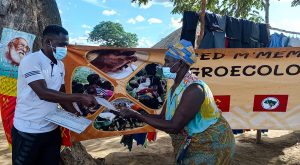 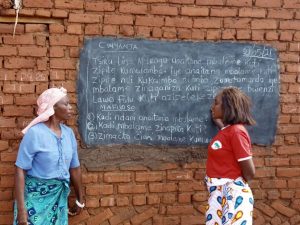