In cities throughout Brazil, protest actions have been organized to demand peace, fair elections and justice for Marcelo Arruda. Arruda, a municipal guard, trade unionist and Petrobras leader was shot dead during his 50th birthday party on July 9, by Jair Bolsonaro supporter Jorge José da Rocha Guaranho, a federal prison guard. Arruda was celebrating his 50th birthday in Foz do Iguaçu with a “Lula 2022” themed party. Luiz Inácio Lula da Silva, the Workers’ Party (PT) candidate, will run for president of Brazil against Bolsonaro in October.

In São Paulo, protests began on July 15, with an action at 5pm in front of the Municipal Theater in downtown São Paulo. In Foz do Iguaçu, movements and family members protested on July 17, in the Peace Plaza, in an action broadcast live by Lula’s Workers’ Party.

The mobilizations were organized by the Popular Brazil Movement, the Landless Rural Workers Movement (MST), Levante Popular da Juventude (Popular Youth Uprising), the Movement of Workers for Rights (MTD), and political parties such as PT, the Communist Party of Brazil (PCdoB), the Socialism and Liberty Party (PSOL) and the Brazilian Socialist Party (PSB), as well as trade unions and religious groups, among organizations.

“The action is mainly in defense of peace in this difficult moment that we are going through, especially in the state of Paraná,” explained Regina Cruz, from the People’s Brazil Front and one of the organizers of the demonstration in Foz do Iguaçu. “We’ve already had an assassination attempt against former president Lula’s caravan, also with bullets, but [in Marcelo’s case], unfortunately, it was fatal,” she says.

For Antônio Funari Filho, president of the Justice and Peace Commission of São Paulo, one of the organizers of the action in the city of São Paulo, “we will only recover our dignity and what has been destroyed in the last years if there is a great mobilization.”

According to the Observatory of Political and Electoral Violence, of the Federal University of the State of Rio de Janeiro (Unirio), between April 1 and June 30 of this year, there were 101 cases of violence against political-institutional leaders in the country, with 24 homicides. Compared to the first quarter of 2020, when the municipal elections took place, there was an increase of 17.4%.

“If the enemy raises the stakes of the threats, we raise the level of organization, of self-protection of each person and each collective,” said Eliane Martins, leader of the Popular Brazil Movement.
The people demand justice in São Paulo

In São Paulo, on July 17, protesters gathered in front of the Assis Chateaubriand São Paulo Art Museum (MASP), to call for justice for Marcelo and to stand against the political and electoral violence that has escalated in recent weeks.

During the demonstration, Laércio Ribeiro, president of the Municipal Directory of the Workers’ Party of São Paulo, announced that the Civil Police of Paraná concluded that there was no political motivation in Marcelo’s murder. The perpetrator, Jorge Guaranho, will be indicted for double murder. The conclusion of the police is that there is no evidence to frame the killing as a politically-motivated crime.

“How was there no political motivation?” asked Ribeiro. “There was a hate crime, politically motivated, not only in Marcelo’s death, but also in the death of Indigenous leaders, in the death of young people from Paraisópolis, of Mestre Moa do Katendê. These deaths are political and politically motivated through hate speech,” said the leader of the Workers Party. “Justice based only on that individual who entered Marcelo’s party is not enough. It is necessary to hold everyone accountable. We will win in memory of those who fought and who fight.”

Also in São Paulo, Jessy Dayane, president of Levante Popular da Juventude, read the letter of Justice for Marcelo Arruda, endorsed by PT, the Brazilian Socialist Party (PSB), the Communist Party of Brazil (PCdoB), the Socialism and Liberty Party (PSOL), the Green Party, the Sustainability Network and the Popular Brazil Movement. “Bolsonarism fears our dreams and wants to create a nightmare. But [Bolsonaro] cannot silence us. The offenses, threats and bullets strengthen our unity. When one of us falls, they become a seed, flourish and multiply,” reads an excerpt.

“Fight for justice,” cries Arruda’s widow in Foz do Iguaçu

“I ask the authorities to fight for justice on behalf of Marcelo. Unfortunately, my newborn son will not be able to live with his father. He was the victim of an act of violence. He fought and did not survive. All I ask for is justice,” said Pamela Silva, widow of the municipal guard Marcelo Arruda, during a demonstration held in Foz do Iguaçu, on July 17, in memory of Arruda.

“I want to thank everyone who is present. To see during Marcelo’s funeral how many people he had a relationship with made me understand the immensity of the diversity of people he had contact with. And this is the mark he leaves for everyone. We need to respect diversity among people,” said his widow.

The event was labeled by its organizers as supra-partisan and multifaith, and held at the Peace Square in downtown Foz do Iguaçu. The action in memory of Marcelo Arruda was marked by emotional speeches in defense of tolerance and harsh criticism of the escalating political violence in the country.

“Regardless of the political side, we have to condemn, with all our strength and energy, any kind of political violence that we witness. We cannot accept it. It must be clear that it is not forbidden to belong to or support any political party, what is forbidden, what is a crime, is to kill people. This must be condemned,” Luís Donizete, brother of Marcelo Arruda and a Bolsonaro supporter, argued into the microphone.

Leonardo Arruda, the victim’s eldest son, spoke of his father’s life: “My father was a simple man, who grew up in a slum, who fought hard to achieve everything he had. He always taught me about the value of things. And the importance of fighting. But his fight was with respect. We must fight for the hatred to end, for us to have peace and for this war to end. We can’t have more families going through this.

In the same vein, the national president of the PT, federal deputy Gleisi Hoffmann, addressed the political context of Arruda’s death. “Comrade Marcelo was murdered for defending a political position. Whoever killed him did it for this reason. The perpetrator and the victim did not know each other, they had no previous feuds. The murderer went to [Arrudo’s] party to exterminate a political group and this has been encouraged for some years. We need to denounce this and keep fighting for life and democracy,” said the party leader.

The councilwoman of Foz do Iguaçu, Yasmin Hachen (MDB), criticized the conclusion of the Paraná Civil Police investigation that decided not to indict the author for political crime. “It was a political crime, yes. We need to put pressure on the authorities. If this continues, the crime of homophobia will no longer be a crime of homophobia. The crime of racism will no longer be the crime of racism. Marcelo was the victim of a political crime, the motivation was political. And as a society, we need to demand that the truth be established,” said the parliamentarian.

At the end of the event, representatives of the Catholic Church, the Anglican Church, the Umbanda and the Islamic Mosque, held prayers in memory of Marcelo Arruda and for peace in Brazil. White balloons with seeds were released to symbolize the ideas of the murdered municipal guard.

“May the ideas and legacy of comrade Marcelo germinate through these seeds. While he lived, he fought the good fight. The good moments will remain with his friends and family. This is our tribute,” concluded Mirá Rocha, a friend of the victim.

Act for peace, justice and democracy in Porto Alegre calls for an end to political violence

A July 17 demonstration in the city of Porto Alegre was part of a series of actions carried out throughout Brazil this weekend for justice for Marcelo Arruda. It took place on the seventh day of the death of the PT and union leader.

The ecumenical celebration was marked by the fight against fascism and had manifestations of religious movements, of lawyers for democracy, of the Popular Brazil Front and one of anti-fascist policemen.

The “Manifesto for Peace, Justice and Democracy”, already signed by more than 30 entities, was launched at the end of the act. “We live in times of abuse of power, of authoritarianism, of attacks on democratic institutions, of network manipulation through fake news,” says an excerpt from the text, which mentions other people murdered for political motivation, such as Dom Phillips and Bruno Pereira and Marielle Franco.

Below is the complete manifesto:

MANIFESTO FOR PEACE, JUSTICE AND DEMOCRACY

Marcelo, Bruno, Dom, Anderson, Marielle, Chico Kalunga, Salviano Souza Conceição, José Francisco Lopes Rodrigues (Quiqui), Zé do Lago, Márcia Lisboa, Joene Lisboa, Moa do Katendê: all assassinated for political reasons. Party leaders, Indigenous, environmentalists, quilombolas who fought for democracy, justice, and the right to land, housing, and the environment. A study by Unirio points out that, in the last three years, political violence has grown 335%. In 2022 alone, 45 political leaders were victims of homicide. There have been 1209 attacks on politicians since January 2019, the first month of the Bolsonaro government.

We live in times of abuse of power, of authoritarianism, of attacks on democratic institutions, of network manipulation through fake news. Marcelo defended Lula’s pre-candidacy. Dom and Bruno defended the Amazon. Marielle and Anderson defended the population of the Carioca slums. Chico Kalunga and Salviano were quilombola militants in the Chapada dos Veadeiros. Quiqui denounced ranchers for violating human rights in Maranhão. The environmentalist Zé do Lago, his wife Marcia and his daughter Joene were murdered in the state of Pará, where they were fighting illegal mining. Moa do Katendê was killed with 12 stab wounds in the back for defending his vote for PT and declaring his opposition to Bolsonaro.

Faced with a corrupt government that condones the criminal actions of landowners, land grabbers, and militiamen, we see deforestation, the poisoning of rivers and food through the indiscriminate use of pesticides, the decimation of Indigenous and quilombola lands, to the extreme of eliminating the lives of those who dare to fight this network of criminals.

*This article is an adaptation of several articles originally published in Brasil de Fato. 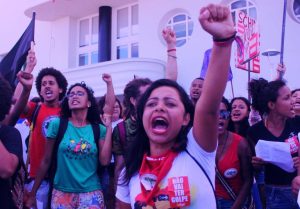 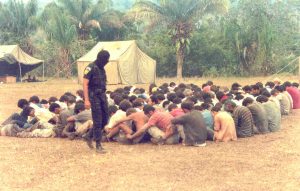 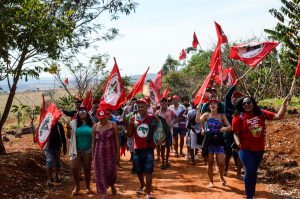