The Haitian peasant organization “Tèt kole ti peyizan” staged a rally outside the Brazilian embassy in Port-au-Prince on Tuesday October 25 to support the candidacy of Luiz Inácio Lula da Silva of the Workers’ Party (PT) in the upcoming presidential elections. Lula will face off against far-right incumbent Jair Bolsonaro on October 30. The peasant organization led by Origene Louis, chanted slogans such as “Solidarity with Lula”, “Enough of Fascism”, “Enough of Racism”, “Long live socialism in Latin America”, etc.

The rally came a day after the organization participated in mobilizations near the United Nations Integrated Office (BINUH) in repudiation of the possible interventions sponsored by its president, Helen Meagher La Lime.

With elections days away in Brazil and the threat of intervention in Haiti looming, Haitian peasants understand solidarity as an important aspect in the struggle of the Latin American peoples against imperialism, racism, and patriarchy.

Anti-racism, anti-fascism, anti-capitalism and civil reparation in Haiti: The reasons behind Haiti’s solidarity with Lula

After 300 years of slavery, Brazil was the last country in the Americas to abolish the institution, and not over ethical and human issues but because it was no longer economically and geopolitically possible. The Black community in Brazil continues to face systemic and institutional racism as symbols, institutions and even the social imaginary are still under colonialist domination.

Today, neocolonialism has an easier time establishing itself in the core of society while violating activists and political militants who denounce it. The data clearly reflect this: according to the 2020 Violence Atlas, 75% of the victims of homicide in Brazil were black people.

Among these Afro-descendants, one could cite João Alberto, murdered in November 2020 by security guards of the multinational company, Carrefour, in Porto Alegre and the black politician and human rights defender, Marielle Franco, in Rio de Janeiro, in March 2018.

Haitian migrants are also no exception to this rise of racist violence in the largest country in South America: a Haitian woman, Fetiere Sterlin, was stabbed by a group of about 10 people in the state of Santa Catarina. The investigation of the case, charged as a racially motivated femicide, remains unsolved for almost 7 years.

As reported by Refugees International in Mexico, most of the Haitians interviewed in December 2021 had emigrated from Brazil in the last three years. The unsafe conditions in Brazil forced many to take the treacherous Darien Gap route through the forest and waters of Colombia-Panama-Peru-Guatemala-Mexico where dozens die every year.

For Micherline Islanda Adel, feminist peasant leader with Tèt kole Ti Peyizan, supporting the project of Lula da Silva of the Workers’ Party (PT) means supporting a project against patriarchy, “which is part of a global agenda”.

She stated “If this [patriarchal] project is stopped thanks to the integral sexual education in schools, since Lula believes in an equitable education, we believe that the Haitian migrant women who migrate to Brazil will have more opportunities. In Haiti as well, since, as I said, violence against women is a global plan. During Lula’s government, living conditions in Brazil were better. And the families of migrants, who depend on them, were less worried. That is why we Haitian women supported Lula. Voting for Lula is voting for life and life is something global.”

Another member of the peasant movement, Jean Jacques Henrilus, affirmed that “We as peasants, as descendants of the enslaved…adhere to the socialist project because we value integral life, we will not associate ourselves with evil projects without faith or law, who are killing and destroying people everywhere for their land and the resources of their countries.”

The Haitian peasants also make no secret of the fact that one of the reasons they support Lula is to make reparations for the consequences of the military intervention led by the Brazilian armed forces during his mandate in 2004.

Brazil led the United Nation’s military intervention in Haiti after the coup d’état of the United States, France and Canada against the elected president, Jean Bertrand Aristide. This military occupation by MINUSTAH, MINUJUSTH almost 20 years is the cause of many crises in the country including constitutional crises (two de facto governments), the migration crisis (more than half a million young people fleeing the country), the health crisis (almost half a million people have been infected by the outbreak of cholera by the UN troops), humanitarian crises, and more.

It is also important to underline that Brazilian soldiers, part of this mission, are at the top of the list of those who carried out human rights violations against the Haitian population. These crimes included the mass rape of Haitian women and minors, violence against the Haitian people, the violation of freedom of expression, destruction of private property, robberies, and more.

“The Brazilian people can see that these same military personnel who were destroying Haiti in 2004, are those who today, are in the Bolsonaro government who are trying to destroy the advances that the PT made in Brazil. That is why it is important that we express our solidarity with the Brazilian people, with all Brazilian workers,” Camille Chalmers, Leader of the Haitian Platform for Alternative Development, underscored.

For this reason, social and political leaders in Haiti also see that a Lula government will provide better conditions to discuss adequate reparations, and request the exit of Brazil from the infamous Core Group. The Core Group is a group of international representatives and diplomats from countries largely from the imperialist core led by the US, and it is currently pushing for a new occupation in Haiti under the same pretexts, while simultaneously rejecting the proposals of the Haitian civil society for “a Haitian solution, in the interests of Haitians” for a way out of the political crisis that the country is facing today.

Hyrvensky Daniel Underson Pierre, Student at the State University of Haiti (UEH) emphaszied the importance of the environmental question in the upcoming elections and the role of Bolsonaro in the destruction of the Amazon. “We have seen an expansion of the ecocide project of the neoliberal system in Latin America. This is clear with the Amazon, which is the lungs of the planet, but currently the forest is subject to massive destruction [of biodiversity] because the neoliberal system wants to impose a fierce agro-industrial system that will destroy the Amazonian beings. [I say beings because] we know that there are also Indigenous peoples who have lived in these spaces for thousands of years. Currently these peoples are also in danger with Bolsonaro’s project. We support Lula’s candidacy because Lula is the inverse of this destructive figure.”

Richecarde Celestin, graduate of the Jean Bertrand Aristide Foundation University (UNIFA) highlighted that the struggle in Haiti against imperialism and neo-colonialism is part of a continental struggle: “The battle we are currently waging in Haiti cannot be reduced to our territory alone…With Latin America we share features, colonial histories and histories of resistance. And this colonial system leaves socioeconomic and political privileges, racist and discriminatory institutions. Latin America, precisely Brazil, had a slave system based on the exploitation of blacks as we do in Haiti. With Lula as president, Haiti’s voice can go further even in the United Nations Council.”

*Jackson Jean is a Haitian journalist and works with teleSUR. 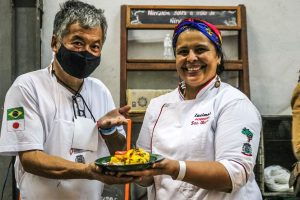 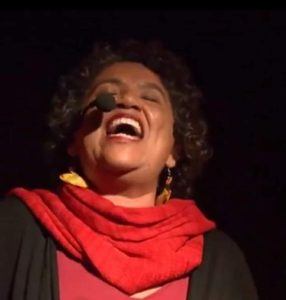 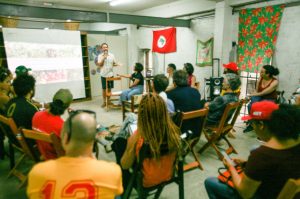