(Harare, February 2021): We are more than a year into the crisis caused by the COVID19 pandemic around the world. This health crisis has caused the death of approximately two million people, and, according to official reports, more than 77 million have been infected so far. However, taking into account unofficial figures, this number could be even higher. Those infected face the possibility of lifelong physical and mental health consequences.

The set of simultaneous economic, political, health and environmental crises that our societies are undergoing has led to a profound social crisis – with severe setbacks in rights, unemployment, corruption, misery, hunger, and violence throughout the world; more so in the economically disadvantaged countries.

Though necessary, the pandemic-related lockdown with its suddenness and lack of proper planning had grave consequences for the working class. Few countries have responded to the issues their people faced with economic and social support policies. In most countries, workers were laid off, others saw their wages halved. A vast majority of those who depend on informal work to earn an income and support their families, be they migrant workers in the fields, peasant families on their plots or fishers in their territories, had to bear the brunt of this crisis without complementary income policies that would enable their families to stay at home. Neglect of rural areas continued. Agricultural workers – forced to work under dangerous conditions to survive – and despite being the ones who feed the world, have no policy to protect them from the virus or provide them with decent access to health care.

Some governments, especially those with authoritarian and pro-Corporate leanings, have even adopted measures that allow big businesses to work with minor restrictions. Doing this has significantly put at risk the health of workers.

Right to Free and Public Health – including prevention, vaccination and long-term treatment!

As La Via Campesina, we demand the Right to public and free health care for all peoples, including the processes of prevention, vaccination and long-term treatment.

We fight for health to be recognized as a human right, especially in this global crisis.

We demand that governments honour their obligation to protect their populations and ensure that everyone has access to preventive, curative and quality health care. This is also recognized by the Article 23 of the United Nations Declaration on the Rights of Peasants (UNDROP), adopted by governments in 2018, which states the Right to have access in rural areas to health services and necessary treatment.

However, most of the treatments and vaccines are under the control of large companies and states, which in a non-transparent way, with a lot of corruption, speculate with life and seek to increase profits. They are distributing the available vaccines mainly among rich countries, leading to competition between these governments, making the vaccine available to the highest bidder. Likewise, some rich governments are hoarding vaccines, buying doses up to five times their population, while in dozens of poor and exploited countries, vaccines have not yet arrived.

The commodification and politicization of vaccines will create a huge gap between the populations of rich countries and those of poor countries who cannot afford them. These people are entirely dependent on the availability of the market and the willingness and ability of governments to negotiate with pharmaceutical companies. These are the same multinational companies that dominate the markets and have the technology to manufacture vaccines; they control the market for equipment, medical supplies and the logistics for vaccine transportation, storage and distribution.

All members of society must have access to information and be able to evaluate the treatments offered. We also demand the recognition of intercultural and popular health, ancestral knowledge present in our societies, that has a holistic view of health and has sustained communities during the pandemic. We affirm that health care must begin with a healthy, sustainable diet that strengthens the immune system, as proposed by Food Sovereignty, a way of caring for the well-being of both people and the environment.

It is unacceptable that vaccines are patented, leaving them under the control of large transnational corporations and the market with its constant attempts to commodify life. We demand an end to patents and to reinstate the Right to information and public control.

Today the pandemic is a global problem, and all societies must mobilize so that the UN, through the WHO (World Health Organization), and the governments guarantee free public vaccination for the entire world population. As La Via Campesina, we affirm the Right to free public health and timely access to prevention, vaccination and treatment in every country in the world.

Let’s fight for the Right to a dignified and healthy life! Globalize the struggle, Globalize hope! 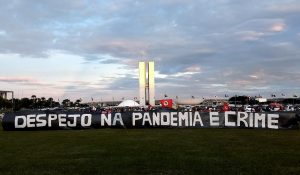 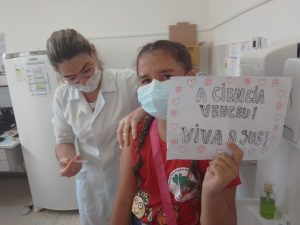 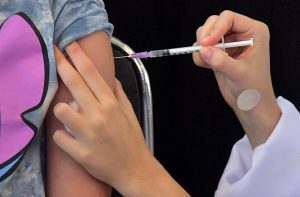