On April 7th, World Health Day, hundreds of social movements from around the world published an international manifesto in defense of life. After more than a year since the outset of the biggest pandemic this century, the world continues to average about 9 thousand deaths by covid-19 per day.

To mark the date and make a global appeal, the International Peoples’ Assembly (IPA), which articulates hundreds of social movements and political parties on five continents, is organizing an Anti-imperialist Week of Struggle from April 7th to 11th, demanding that the vaccine against the novel coronavirus be treated as a public asset, among other things.

In the manifesto, the internationalist network declares that “the Covid-19 pandemic has highlighted the contradictions of capitalism throughout the world, which puts profit above people’s lives”.

Therefore, in the economic field, organizations demand that governments guarantee a universal basic income so that workers may comply with health measures – such as social distancing – and provide lines of credit so that small and medium-sized companies do not go bankrupt. With regards to geopolitics, they argue that the international debts of every nation and all conflicts should be suspended.

“We are at a stage of the social struggle that we call an ideological struggle. The main thing to be done is to make people aware of their rights so that society, in its different forms of organizing, puts pressure on their governments”, defends João Pedro Stedile, one of the leaders of the Landless Rural Workers Movement (MST), which is also part of the IPA international network.

In Brazil and other Latin American countries, symbolic acts of protest are scheduled in various capitals for the week of struggle. In Europe, the IPA’s task is to collect 1 million signatures to demand that the European Parliament discuss a proposal to make the vaccine a public asset – something advocated by the internationalist network and by the United Nations (UN) itself.

Worldwide, approximately 664 million people have been vaccinated against covid-19, however, the vast majority are in the United States (165 million), China (140 million) and the European Union (79.8 million), according to a survey by the Nosso Mundo em Dados website.

The United Nations recognizes that the world’s largest economic powers hold 75% of the immunizations already produced, while about 130 nations have not even been able to kick off a vaccination program.

“The countries where capitalism is most developed are stashing and doing business among themselves in regards to vaccines. More than 130 countries have not yet started vaccinating simply because they are not part of this business model”, points out the president of Spain’s Communist Party, José Luis Centella Gómez.

Europe and Latin America are experiencing fresh waves of contagion due to the emergence of new variants of the virus. In Brazil, the P1 and P2 strains appeared, which are more contagious and aggressive. In the United Kingdom, the VUI variant was detected for the first time, which can be 40% to 70% more transmissible and has already spread to Germany, Spain, Italy, Denmark and even Australia.

On the day that the World Health Organization (WHO) celebrates its 73rd year, social entities in Europe are demonstrating at the European Union headquarters, as well as UN buildings to demand equitable access to inoculations.

“The United Nations, which on other occasions was very belligerent, has now been unable to raise its voice against the powerful. This leads us to once again demand a restructuring of the body and that the UN comply with its founding charter. Instead of being an element of pressure, they are not playing any role”, criticizes Centella.

The creation of the Covax consortium, promoted by the WHO, the Alliance for Vaccination (Gavi) and the Coalition for Innovation in Preparation for Epidemics (Cepi), which promises to distribute 2 billion doses by the end of 2021, was not enough to promote democratic access to vaccines. Therefore, the current principal demand is for breaking the patents on vaccines against covid-19.

The proposal has been defended by India and South Africa in the World Trade Organization (WTO), since October last year, and would allow the vaccine formulas to be freely distributed, providing decentralization and accelerating their production. Although 100 countries support the measure, the United States, the European Union and Brazil were opposed to it.

“The quickest way to produce the vaccine in poor countries is by breaking the patents. Hence, the laboratories that already exist in these countries, as is the case with Brazil, would start producing without concern for royalties and licenses”, explains João Pedro Stedile.

While vaccine production remains governed by market logic, the largest pharmaceutical companies get richer. According to a survey by Forbes magazine, during the pandemic, 40 new billionaires from the health sector emerged, including the directors of Moderna and Biontech.

In addition to preventing the release of the vaccine patent, the United States and the European Union have already acquired, in previous contracts, double or triple the number of doses necessary to immunize their entire populations. This market reserve has been constantly denounced inside UN bodies by representatives from Mexico, Venezuela, Russia and China.

Since the start of the pandemic, the Chinese government has advocated that the vaccine be declared a universal asset. China is the largest exporter of vaccines in the world, sending around 500 million doses to more than 40 countries.

For the president of the Spanish Communist Party, the root of the problem lies in the very structure of the current political-economic system.

“We want to make it clear how capitalism is not part of the solution to any problem, but is the problem itself. Humanity is not free from suffering a pandemic, a natural disaster, but it must have the mechanisms available to deal with these issues. Today we have natural and medical resources available, but they are in the hands of a few. So it is increasingly evident that we must end capitalism lest it ends humanity”, concludes José Luis Centella. 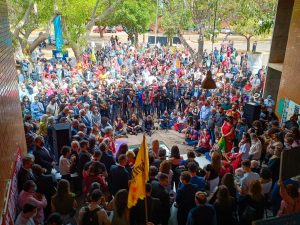 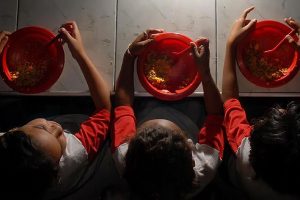