By Lays Furtado
From the MST webpage

On Saturday (6), the Movement of Landless Rural Workers promoted a historic meeting with its militants and friends, where the film that tells the trajectory of the revolutionary leader Carlos Marighella was shown.

“The meeting could not have been held anywhere else but in Bahia,” commented João Paulo Rodrigues, from the MST National Directorate. Considering that, although Carlos had militated to free the entire Brazilian nation from authoritarian regimes, the communist leader was from Bahia just like the film’s director, Wagner Moura, who was also present at the event.

It was a symbolic moment where “Marighella met with his audience,” Wagner Moura mentioned. The act was attended by numerous personalities from the arts, culture, militancy and politics who safeguard the legacy of the revolutionary icon and support the MST’s struggle for Popular Agrarian Reform in the country.

“The feeling is very potent… this was the most important film screening we’ve had so far!” said Wagner Moura about the special screening of the film Marighella at the Jacy Rocha Agroecological Settlement in Prado, Bahia.

Especially considering an emblematic history of agrarian conflicts that have been suffered by landless people in the region. Since last year, the Bolsonaro government has tried to intervene through federal agencies against the movement in Prado, where the film screening took place. In addition to the attacks by armed militias that took place last week.

“There is nothing more powerful for me than when I feel that there is a true connection between Marighella’s struggle and the will that we had to talk about these struggles, and the struggles that are happening now in Brazil,” Wagner pointed out.

The director of the film declared that the symbolic and historical encounter between the work “Marighella” and its audience makes him believe in a better future for the country. And he pointed out the desire to make the film go beyond narrating the resistance to the military dictatorship, its true intention is to talk about all those who dedicated their lives for democracy and rights in the country.

“I don’t see a more important historical struggle in Brazil than the struggle against racism and the struggle for land. The MST is the most powerful social movement I know. The feeling I had was that the film had found its audience, really!”, Moura said.

“Democracy is a plow that we can’t help but dispute”

Before the screening of the film, since Saturday morning (6), the settlement hosted a diverse program of activities, bringing together about a thousand people. There was a Plenary of Terreiro, Indigenous and Quilombola Peoples, concomitant with the Agroecological Fair with Agrarian Reform products from various parts of Bahia and Armazéns do Campo.

In the afternoon, there was a political act in defense of Agrarian Reform. On this occasion, the participants of the table representing the Workers’ Party (PT), the Communist Party of Brazil (PCdoB), the National Union of Students (UNE), the Federal University of Southern Bahia (UFSB) and the University of the State of Bahia (UNEB) saluted the movement.

Reaffirming the commitment to the “National Plan to Plant Trees and Produce Healthy Food,” 2,000 native trees were planted in honor of the revolutionary leader, with the participation of his family and other guests. “Marighella is also a seed of our struggle,” declared Barbara Loureiro, coordinator of the national plan, remembering that this week marks 52 years since his death.

In emotional speeches during the planting, Bernardo, indigenous Pataxó, declared that it is necessary to plant the seeds of tomorrow for future generations. Pastor Henrique Vieira greeted the MST and popular resistance in the name of Marighella, Zumbi, Dandara, among many others who died for humanity. Maria Marighella, the guerrilla’s granddaughter, affirmed that “democracy is a plow that we cannot stop fighting for”.

In addition to Wagner Moura, part of the cast of the film were present Herson Capri, Bella Camero and Felipe Velozo. Filmmaker Tata Amaral was also present, as well as actors Leandro Ramos and Ernesto Xavier. The artist Preta Rara, Otto and Pally Siqueira also attended the event, among other influencers, politicians, unionists, journalists and friends. 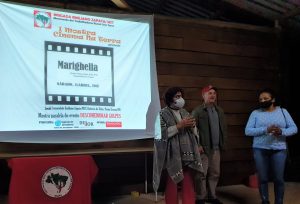 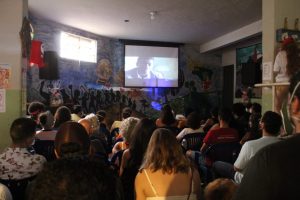